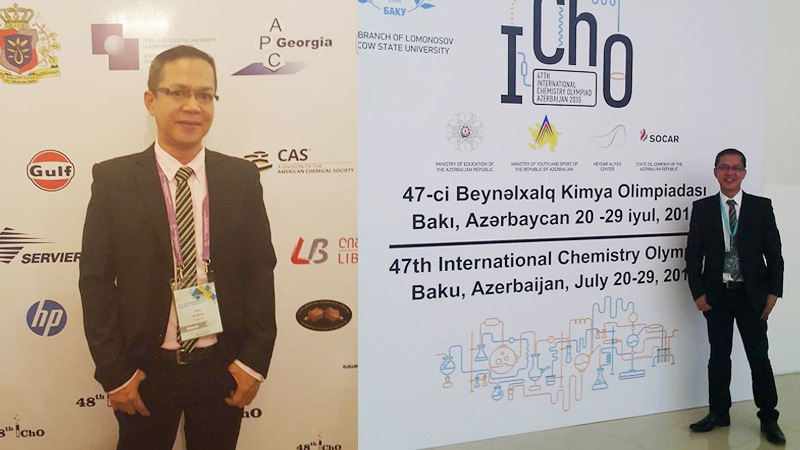 To PACT, Inc., to KKP, to ICP and to PFCS, thank you for giving me the opportunity to represent the Philippines as an observer to the 47th and 48th International Chemistry Olympiad. We have made an impossible event in our Chemistry history a reality. The IChO 2017 will welcome our first group of Filipino students who will compete in the Olympiad in Pathom, Thailand.

Allow me to give you the highlights of my travel here in Georgia as an official IChO observer.

After almost 24 hours of travel from NAIA to Georgia, I arrived at the Tbilisi airport at around 7 pm on Saturday, July 23. I proceeded immediately to the immigration counter and presented my e-visa and some documents. The immigration officer was accommodating and very welcoming to all IChO participants and so, I entered Tbilisi Georgia with no problems encountered.

At the lobby of the arrival area, IChO organizers and volunteers were waiting for the participants. We waited for other participants to arrive. A service bus brought us to the Holiday Inn Hotel, the official residence of all mentors and guests of IChO for the next 10 days. When we arrived at the Hotel, registration was still on-going and they informed us that participants from 11 countries have not yet arrived.

After breakfast, we were all brought to the Rustaveli National Theatre for the opening ceremonies. The venue is an old building/theatre, quite small for all the participants. The ceremony was less impressive as compared to last year’s in Baku . We were welcomed by the Minister of Education and Science of Georgia, Minister Aleksandre Jejelava, and by the Chairman of the Steering Committee of the 2016 International Chemistry Olympiad, Dr. Gabor Magyarfalv. The culture of Georgia was shown and emphasized in the songs and dances performed during the program. The program hosts introduced the participating students from the different countries. The 48th IChO was attended by 73 competing countries, and 5 other countries (including the Philippines) as observers.

After the program, all students were transferred to the Hotel Asterion (where they will stay), while mentors and guests were brought to the Agricultural University of Georgia. The mentors visited the laboratories which will be used for the practical exams. The school is an Agricultural University, the laboratory rooms are not really intended for a wet laboratory class. There are no available sinks inside the laboratory rooms and obviously less number of apparatus were prepared for the students. It seemed to me that only simple laboratory techniques will be included in the competition. The mentors were given the list of reagents and materials/apparatus that will be used for the practical exams. After checking the materials and reagents, the organizers brought us back to Holiday Inn.

At night, a Jury meeting was held. This was the time when questions to be used in the examinations were discussed for the approval of all or at least, the majority. First, the organizers gave out copies of laboratory questions. The organizers discussed the questions and the mentors critiqued it. Every time an issue was raised regarding how a question was stated, or on points distribution, the formula, the terminologies or the overall question itself, the majority votes always prevailed. Three tasks or three problems will be answered by the students by performing different laboratory techniques. The laboratory examination is good for a maximum of 5.5 hours.

After breakfast, the mentors started their work. Mentors translated the laboratory questions to different languages. The mentors translated the exams for their students and since there is an access to the internet, some mentors used Google translate. The room for the translation of questions was small and so, some mentors preferred to work outside. The concern about the leakage of questions to the students was not raised because students were not allowed to use any electronic gadget including cellular phones and laptops. The organizers also cut the internet connection at the students’ hotel.

When the mentors were done with their translations/revisions, the organizers printed the final exam, and each copy was put inside an envelope.

In the evening, the IChO organizing committee had a meeting and I was invited by Dr. Gabor Magyarfalv to attend to share with them how the Chemistry curriculum is being taught in the secondary schools in the Philippines, and how we organize our own Chemistry Olympiad. They were glad that the way we conduct our Chemistry Olympiad is almost similar to that of the majority of the IChO member countries. Dr. Gabor assured us that we can bring our students to the IChO starting next year. The organizing committee was also delighted when they found out that we, the Philippines, is also interested in hosting the Olympiad in the year 2020 or year 2022.

Today, the students took the laboratory exams at the Agricultural University of Georgia while the mentors were given time to look at the problems that will be used for the theoretical exams. Mentors started discussing the questions that they have read. The initial reaction was that the questions were too hard to answer or were of the difficult level.

After lunch, the organizing committee presented the theoretical problems, one by one, and were critiqued by the mentors. Eight (8) problems will be answered by the students for 5 hours. Again, the organizers and the mentors deliberated/debated/negotiated until they came up with the final version of the questions that will be used for the exams.

So far, the 48th IChO is going on as smoothly as planned. I will try to give you the next part of this email before I leave Georgia, or as soon as I get back there.

Once again, thank you for giving me the opportunity to represent the country as an observer in the 48thInternational Chemistry Olympiad here in Tbilisi, Georgia.

Hello again.  I am back! Allow me to continue my report.

The whole day was used to translate the theoretical exams into different languages. Again, the mentors worked at different places as the room for translation cannot accommodate them all. This is also the day that some mentors from other countries, gave their gifts/souvenir items to the IChO participants. Country pins, chocolates, candies, bracelets, papers, key chains, pencils, ball pens and USBs are some of the items that they gave.

After translation/ revision, the organizing comm. printed the questionnaires and again, placed them in an envelope.

Today the students took the theoretical examinations. As this is a free day for all mentors, observers and guests, the organizers brought us to the City of Telavi, an old city in Georgia. Telavi is home to several of the region’s world-famous wineries, art museums and castles. The most famous BatonisTsikhe castle, which served as the Kings’ Palace between 17th and 18th century is also located here. There were on-going renovations inside the Palace and so, we were not allowed to get inside. We then proceeded to a nearby winery and vineyard. The area is surrounded by a large plantation of grapes, apples, plums, raspberries, tomatoes and other fruits. The winery is producing Chacha wine which is the most popular wine in Georgia. If the Chinese and Japanese usually have their “tea break”, the Georgians usually have their “Chacha break”. They also have wine cellars with unique collections of wine. We were given samples of different wines to taste, which some mentors found so enjoyable that they drank much. Georgia is so blessed with different kinds of fruits which don’t grow in our country.

Later that afternoon, we were brought to Hotel Asterion where the students were staying and some sort of a reunion dinner party was held. After the short party, we returned to our hotel, the Holiday Inn.

The whole day was alloted to checking papers. The test writers were also the ones who checked the papers. After lunch, some mentors saw the checked papers of their students while checking was still on-going. While waiting for this to finish, some mentors toured the old city of Tbilisi while others opted to stay in the Hotel.

In the evening, a Jury meeting was held and the IChO organizers announced the plans for future IChO events.

The 2017 IChO will be held in Thailand. This is actually the 2nd time that the country will host the IChO. Thailand hosted the 31stIChO in 1999. The 49thIChO will be on July 6 – 15, 2017 at the Salaya Center, the Main Campus of Mahidol University in Nakhon, Pathom, located at about 50 Kilometers from Suvarnabhumi Airport.

For 2018, the 50th anniversary of IChO, the Olympiad will take place simultaneously in two countries– in the Czech Republic and in Slovakia on July 19 – 29.

Negotiations are on-going for the 52ndIChO and if things go well, the IChO in 2020 will be held in Korea.

The organizing committee is now looking for countries who are interested in hosting the next IChO’s starting in year 2022.

After the announcements, an election was held to select the new members of the organizing committee for next year. Dr. I-Jy Chang from Thailand was elected Chair of the Steering Committee of IChO 2017.

After breakfast, the arbitration groups started. The mentors talked to the groups who wrote the questions and checked the papers, and sought additional points. Some of them explained that the answers of their students can still be given extra or partial points by giving their justification.
I think arbitration is done to make everybody happy. If the mentor is not satisfied with the scores of his/her students, he or she can still negotiate with the test writers. After the arbitration, papers were submitted to the organizers.

In the morning, participants were given free time to do their last minute shopping or tour of the city. After lunch, we were all transferred to the Rustaveli National Theatre for the Awarding and Closing Ceremony.
There were some loopholes in the execution of the program like playing the video with no audio, the IChO flag was missing during the turn-over ceremony, etc.. In fairness to Georgia, they hosted the IChO successfully even with only 2 to 3 months of preparation.

The Honorable Mention were called first to receive their medals, followed by the Bronze medalists, then the Silver medalists and last to be called, the Gold medalists. A boy from Romania topped the Olympiad for this year. Standing ovation was given to the boy by all students who were also surprised of the results.

After the program, a farewell banquet was hosted by the Prime Minister of Georgia. He thanked the participants and wished them good luck on their return to their own countries.

The last day of the IChO. With different flight schedules, some participants left the hotel early morning, some during lunch time and some in the afternoon. I belonged to the last batch of participants who left the hotel in the afternoon. My flight was still in the evening of Monday, but I decided to just stay and wait in the airport. I left Georgia at around 21:30 and reached NAIA Terminal 1 at around 23:00 of August 2. It was a 26 hours trip from Georgia to Manila. I am happy to be home.

Just like last year, I have with me some pictures and papers of the proceedings of the 48thIChO which I am excited to show to all of you in our next meeting.

To PACT, Inc., to KKP, to ICP and to PFCS,thank you for giving me the opportunity to represent the Philippines as an observer to the 47th and 48th International Chemistry Olympiad. We have made an impossible event in our Chemistry history a reality. The IChO 2017 will welcome our first group of Filipino students who will compete in the Olympiad in Pathom, Thailand.